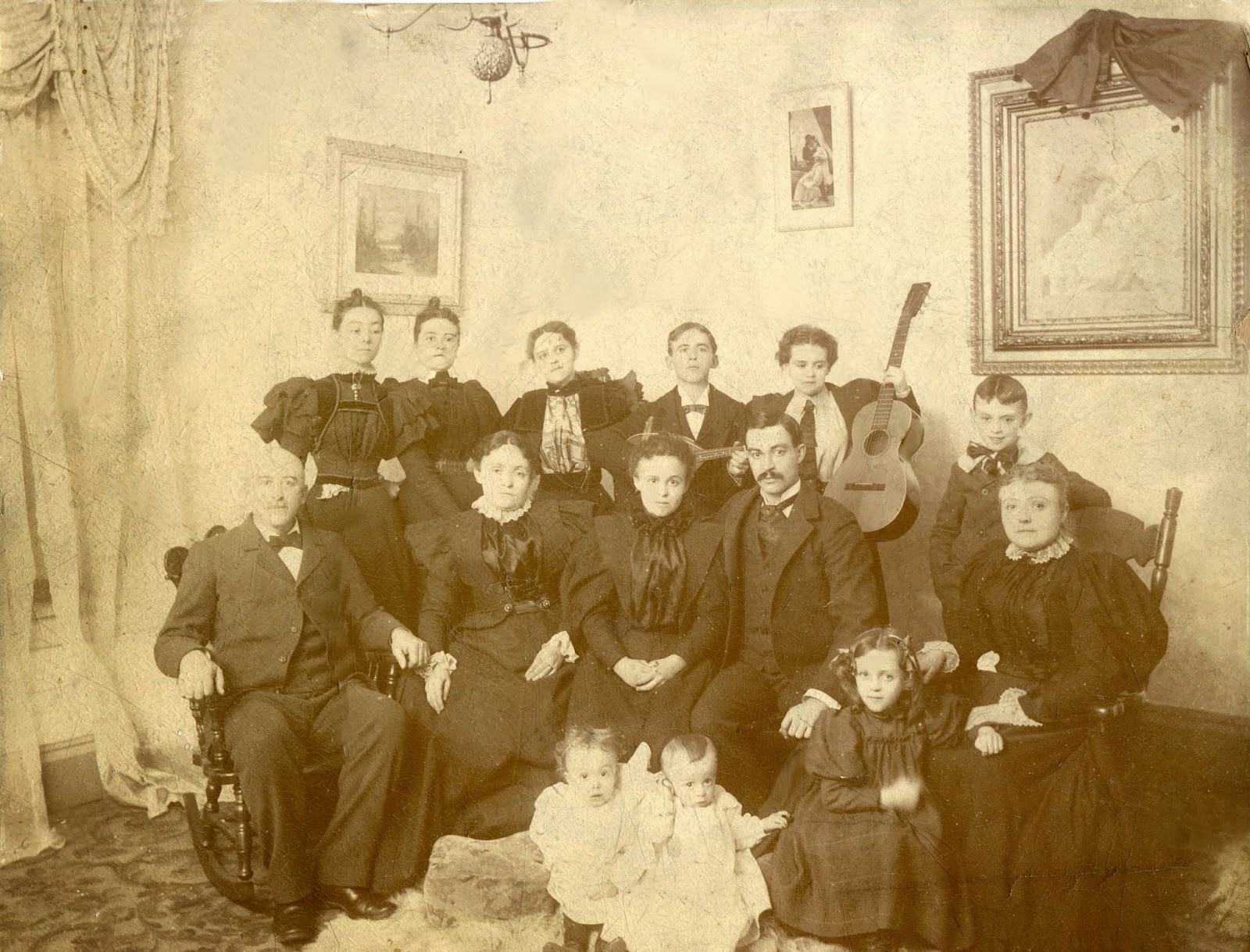 I love old photographs and this one has a lot going on to love. My great grandfather is the lad in the back row with his elbow on his mother's chair. I laugh when I see this photograph because his hair style reminds me of the show "The Munsters."  This is the 1890s and photography still took some time there is some motion blur on his sister's hand where she moved it in the front row. The top knots on the sisters in the back row are pretty divine too. The musical instruments and the home setting give the photo great ambiance, as does Hector's dashing son-in-law in the middle row.
Posted by Katy Wech at 2:56 PM No comments: 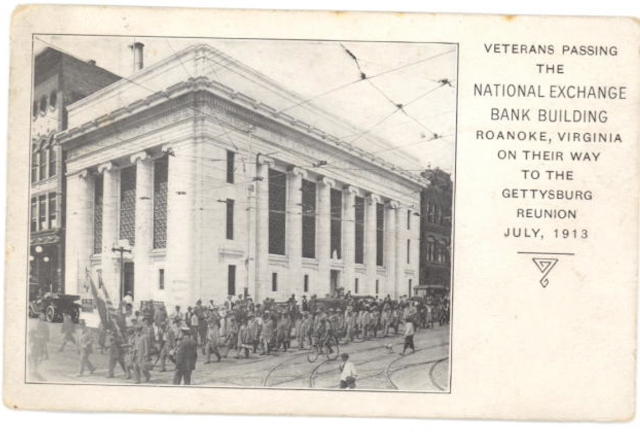 While searching for accounts of Roanoke area Confederate soldiers who attended the Grand Reunion, 50 years after that fateful battle, I came across this great image. I still continue to look for lists of those in attendance to see if my great great great grandfather (who was alive in 1913) chose to return for the reunion. He survived Pickett's Charge and was captured at the angle in Gettysburg. He survived imprisonment and returned to Craig County, Virginia.

This is a photograph of an original image at the Amherst County Historical Society of a reunion of Civil War Veterans of Amherst County, Virginia.
Posted by Katy Wech at 8:09 PM No comments:

How morbid! Can there be such thing as a good obituary? I didn't think so until I started researching genealogy. We all have to die. Once we accept that, then we can appreciate a good summary of our lives. Genealogy is easier; as it doesn't deal with our own mortality, but our predecessors. If everyone has to go sometime, why not appreciate a good summary of one's life.

My extended Carper relations from Craig County, Virginia were eulogized properly and cited as an excellent example of such writing. These were simple people living in the country, who worked hard every day of their lives just to get by in life. The "Stars and Stripes" the newspaper that serves the military overseas, on 14 October 1985 (p. 18) published the following: 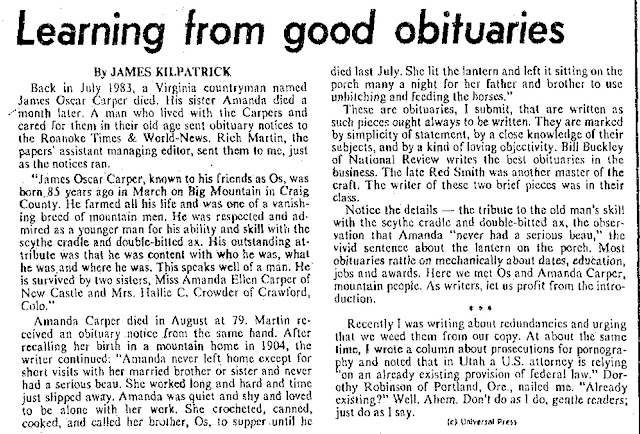 Virginia Law and Murder in the Family

When family history contributes to the current definition of murder in Virginia state law my interest is piqued. I remember my shock that my sweet, all loving great grandmother could be bitter towards anyone. Her bitterness was directed at the murderer of her grandfather, Joseph Creed Carter in Amherst, Virginia. As I researched the murder of her grandfather I discovered that his murder is still cited in case law to this day.

In the recent past, The Washington and Lee Law Review, cited his murderer repeatedly.The review discusses the difference between first and second degree murder in Virginia. His murderer, Frederick McDaniel, was sentenced to hang for his fatal assault on my gr-gr-gr-grandfather. On appeal he won a new trial as the Commonwealth of Virginia Supreme Court in a vote of 3-2 decided it was second degree murder not first degree murder. First degree murder requires premeditation, and the Court of Appeals decided that "the killer may form intent to kill at the moment of killing." (Washington and Lee Law Review, vol 40, issue 1, article 20, p. 345). Joseph Creed Carter's murderer received a new trial (since apparently he didn't bring the stick to the property, nor spend enough time contemplating his assault--- showing premeditation required for first degree murder) and was subsequently sentenced to eighteen years in prison on the lesser charge of murder in the second degree.

Frederick McDaniel avoided death. Joseph Creed Carter was bludgeoned over the head on his own property after letting the murderer borrow his team of horses and wagon. Nice guys finish last? Or sins of the father being revisited upon his son? (Frederick McDaniel was the son of an ex-slave. Joseph (known as Creed) Carter's father was a slave owner.) This was the Reconstructionist South and tensions were at a fevered pitch. The altercation was fueled by alcohol (both parties having imbibed) and racial tension. McDaniel called Carter "a liar", not something a fellow who fought in the War of Northern Aggression was going to take lightly coming from a negro.

McDaniel (the negro) had returned the horses and wagon, but failed to feed them according to Sallie Carter, Joseph's wife. When he (Carter) heard this and saw the man (McDaniel) walking by, Carter approached the perimeter of his property while his pregnant wife stood on the porch. The modern day equivalent is of course, borrowing someone's car and failing to refill the tank, even though in this case the gas (feed) was in the barn (of the lender).Verna (my lovely great grandmother)'s grandmother watched in horror as her husband (the lender of the horses) was "brained" by a large stick that McDaniel used to strike Carter over the head repeatedly.

Poor Sallie! She was left with a child on the way, and seven other children ranging in ages from five to fourteen. Hard times had already fallen on the family, and the farm had been getting smaller to pay off debts to neighbors. Verna's mother was eleven years old at the time of her father (Joseph Creed Carter)'s death. She would marry at a young age (16) and lessen the burden of another mouth for Sallie to feed by starting her own family.

Sallie did not remarry and she was the head of the household maintaining the small family farm when the census was taken in 1900. Sallie lived until 1915, and the story of her husband's death was family lore. I have a letter in which my great grandmother, Verna did document her recollections of the family lore  to one of her daughters.

I read the case law pertaining to my relation's murder with great interest-- as his murder affected my great grandmother, who I knew and loved. In the near future I will be obtaining copies of  the court documents that lead to the legal decision that differentiates first and second degree murder in the Commonwealth of Virginia. It is an interesting, albeit sad tale of murder in the second degree following a sad part of American history. 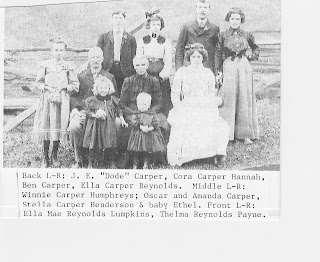 Circa 1915, this photo of a Craig County, Virginia farming family might have been taken to celebrate a wedding. Note, the flowers and the hairpiece on the woman on the far right. The patriarch of the family, seated, is Oscar Washington Carper. Oscar and his wife Amanda had eleven children together.

Oscar was a survivor of the third, and bloodiest day at the Battle of Gettysburg. He served with the 28th Virginia Regiment, Company C. He was captured at "The Angle" following General Pickett's ill-fated charge. He was paroled February 16, 1865 and returned to Craig County where he then married Amanda Leffel on 11 July 1866.